Monique Fortenberry on Saving Others and Herself 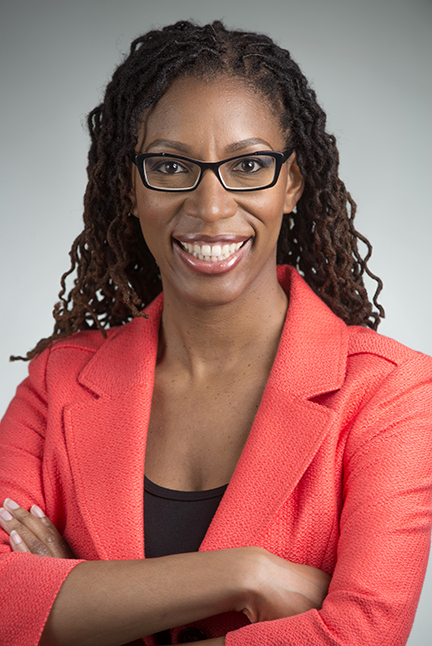 The first eight to nine years of my life were idyllic, at least from my point of view. I grew up in a socio-economically diverse Black neighborhood on the south side of Chicago. We were working class, I believe, and I felt like I fit in. I remember it as a good life. Even though my parents were separated, their families were not, so I spent my life being loved by many people. Then things fell apart. My father lost his job and the financial and emotional changes in our family took a toll on my mother, who was ill off and on for the remainder of my childhood. Going to the welfare office, using food stamps, and eating government cheese became part of my new reality. School was my escape, especially college because we were evicted from our home around this time. At Northwestern University, I was a resident assistant and then a residence hall coordinator, which is really consistent with who I am, but also provided room and board. I looked for any kind of summer programs that included room and board because I needed a place to live when I was not in school. Thankfully, I was accepted to an intro to law program for minority students at the University of Wisconsin, Madison.

The program included participation by black lawyers in the Madison area, and I was just blown away by them. And so after that, I decided to go to law school. I went directly to law school because I was literally running for my life, trying to get to some stability and get to a salary and all that. It was a bad decision! I was burnt out on day one and needed a break, but I was too young to know it, or just not aware enough, or too traumatized. Unsurprisingly, my grades were not great, but my saving grace was joining the Frederick Douglass Moot Court Team through the Black Law Students Association. The team required a high level of commitment and hard work, and an expectation that we would represent Georgetown well. Former students came back to help us prepare for competition, as did our professors. Those experiences helped me gain my footing and improve my skills and confidence.

Since my grades put a corporate law firm out of reach, I threw a Hail Mary and tried for a judicial clerkship. It just so happened that the day Judge Frederick Dorsey received my resume, he’d learned the clerk he’d hired had accepted another position. I interviewed and got the job.

Judge Dorsey was an awesome mentor, but working for him was like being in basic training. I arrived at work before him and left after him. In addition to managing his docket, I had to do things like clean the office refrigerator because ensuring that everything was in order was a part of the job. After two years in his chamber, I was confident I could handle any job, and I was right. I did a few years at the Small Business Administration, and then went to a law firm. That’s when the cracks in my life actually came.

One of my best friends committed suicide three days after telling me in a joking way that she was depressed and suicidal. I was crushed, grief-stricken, devastated, and probably depressed. I went to the DC Bar and that’s how I became involved in the DC Bar Lawyer Assistance Program.. I worked through that process for a while and the firm was totally, absolutely wonderful about it.

The DC Bar has  counselors who can meet with you one-on-one—free and confidentially—and they refer your for additional assistance if you need it. I did, and shortly after I began to see a therapist,  9/11 happened. I was in West Virginia on 9/11, taking and defending depositions with a very contentious opposing counsel. I thought it could be the last day of my life and I was spending it arguing with opposing counsel  who insisted we  continue depositions, even though the world was falling down around us. I said to myself, “it is time for you to stop. It’s time for you to stop.”

Some months later, I decided to leave the firm and take the break I had been needing for years. I did some contract legal work during the break, and went to Mexico to study Spanish. Thereafter, I returned to SBA where I stayed for about a decade, eventually becoming a Deputy General Counsel, and I have spent the last seven years as Deputy Executive Director of the Federal Trade Commission.

At some point after I graduated, Dean Bellamy asked me to teach appellate advocacy with the Charles Hamilton Houston pre-law program. Later I was asked to be on Georgetown Law’s alumni board. At some point I said, okay, I’m consciously committing to this place, and I am determined to make sure the board stays attuned to the voices of people like me who have a lot of potential and are navigating race, gender, financial insecurity and other issues that impact the ability of amazing students to succeed as law students and lawyers. I am happy to share that Georgetown has a program now for students like me. The RISE Program helps first year students from historically underrepresented backgrounds navigate their first year through pre-orientation, mentoring, and networking. I needed RISE, and I am thrilled it is available to a new generation of students.

When I mentor students, I remind them that they are talented and capable, something law school can help you forget; that we need the unique gifts they bring to the law, especially because of their diverse backgrounds; and, that the years pass quickly, so they might as well spend them pursuing paths that feel right for them. Finally, I share with them the biggest lesson I have learned, which is that work has its place, but having people in your life who love and support you is the real treasure.