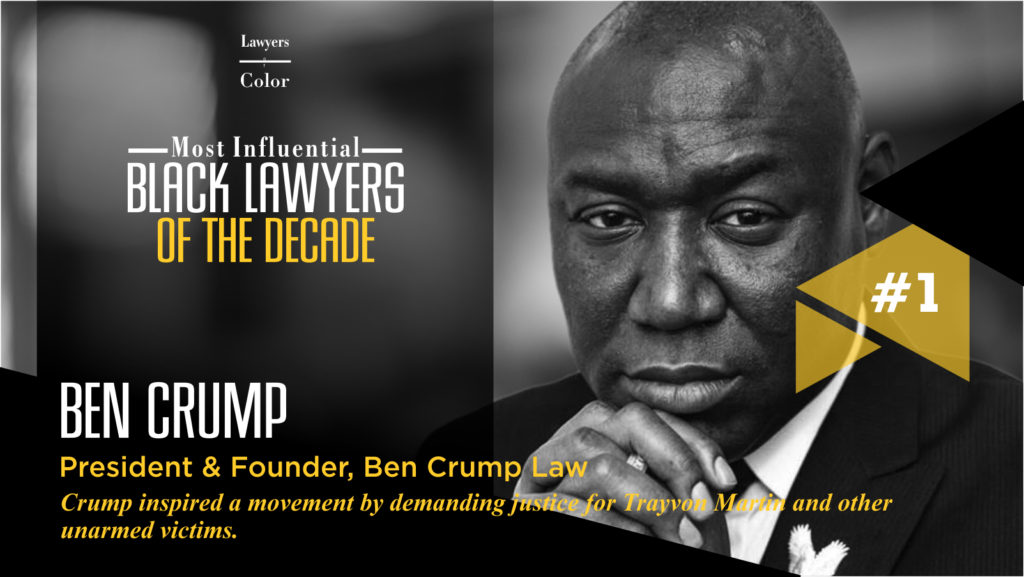 “You kill a dog; you go to jail. You kill a little black boy, and nothing happens.”

In 2006, his career approached stardom when he took a case against the killing of 14-year-old Martin Lee Anderson in Panama City boot camp. He secured a $5 million settlement for the Anderson family and his win facilitated the closure of all Department of Juvenile Justice boot camps in Florida.

Between 2012 and 2014, Crump became a ubiquitous figure on national TV news shows demanding justice for the families of Trayvon Martin and Michael Brown. Each of the teens had been unarmed when they were killed, Martin by an overzealous self-appointed neighborhood patrolman and Brown by a police officer in Ferguson, Missouri. These civil rights cases against the unlawful shooting of unarmed black men and his advocacy inspired the Black Lives Matter movement.

Crump’s stature grew even more this past summer. In May 2020, he was barely off the plane from southeast Georgia meeting the family of Ahmaud Arbery, an unarmed black man who was shot to death while jogging, when he emerged with the family of George Floyd, who was killed when a Minneapolis police officer pressed his knee into Floyd’s neck for more than eight minutes.

His lesser-known mass-tort and class-action lawsuits are actually the bread and butter of his law practice. Currently he has cases against Johnson & Johnson claiming the company marketed talcum powder to minority women despite studies linking it to ovarian cancer, and he represents Flint, Mich., residents affected by the city’s contaminated water.

While it is true his ability to create a media frenzy can contribute to his cases increasingly settling for large sums, Crump’s success has been his ability to use the media to get public support behind him. Ultimately, Crump wants equal justice under the law.

Two recent convictions that rejected the Stand Your Ground defense show how public opinion is informing justice. Michael Drejka, who shot and killed Markeis McGlockton at a convenience store, was sentenced to 20 years for manslaughter. Nouman Raja, who working as an undercover police officer fatally shot musician Corey Jones, was found guilty of both manslaughter and attempted first-degree murder and sentenced to 25 years — the first conviction of a police officer for an on-duty shooting in Florida in three decades.

On a $2.4 million settlement from the city of Sacramento for the family of Stephon Clark, a young black man who died after being shot seven times by police in his grandparents’ back yard. The officers were not charged, but California changed its use-of-force law.

Ben Crump Law, in an alliance with Morgan & Morgan, has access to a large national network of lawyers with offices in California, Georgia, Illinois, Texas and Washington, D.C.

Crump inspires young lawyers – conference in DC. They see themselves, a regular guy with no connections who just did it.

Crump grew up “government-subsidized housing” poor in Lumberton, North Carolina. In high school, his mother sent him to live with his stepfather, a math teacher in South Florida. Crump went on to Florida State University on scholarship then on to their law school. In spite of all he’s accomplished, he still comes off as a humble, regular guy, and that inspires prospective lawyers who pack lecture halls to hear him speak.

Crump served as the 73rd President of the National Bar Association and is President of the National Civil Rights Trial Lawyers Association. He also co-founded of MyDad360, a mentoring program for fathers. He was the first African-American to chair the Florida State University College of Law Board of Directors, and currently serves on the Innocence Project Board of Directors. He was bestowed the NAACP Thurgood Marshall Award, the SCLC Martin Luther King Servant Leader Award, the American Association for Justice Johnny Cochran Award, and the Alpha Kappa Alpha Eleanor Roosevelt Medallion for Service.

Even now, with fortune and fame, Crump lives in a custom-built house in the historically black neighborhood near FAMU.