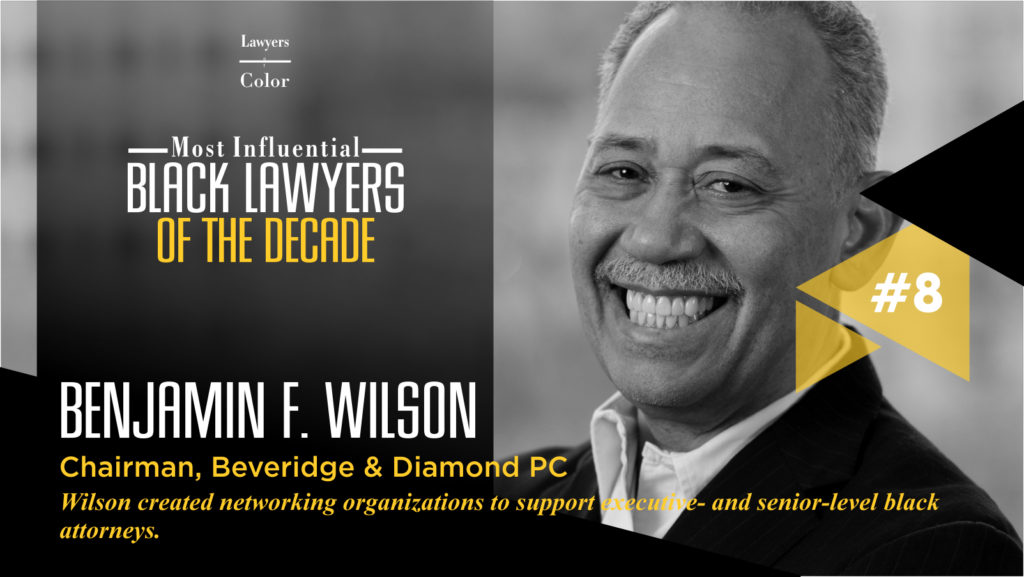 Esteemed attorney, Ben Wilson is often lauded for his professional accomplishments, which he makes a point of pairing with his important work of increasing diversity in the legal profession. In addition to mentoring attorneys at Beveridge & Diamond where he serves a Chairman, Ben founded the Managing Partner Networks and Diverse Partners Network to ensure that attorneys of color wouldn’t have to experience the isolation and lack of mentorship that he endured in his career, which he began at the Atlanta-based firm, King & Spalding.

In 1979, Ben joined the Civil Division of the U.S. Department of Justice where he twice received a Special Achievement Award. Such honors have been a mainstay. In recent years, Savoy Magazine named him to its list of the Most Influential Black Corporate Directors (2016) and Most Influential Black Lawyers (2015). In 2014, he received the Spirit of Excellence Award from the American Bar Association (ABA) Commission on Racial and Ethnic Diversity in the Profession, the Commission’s highest honor. ELI magazines called him “The Defender” for his unwavering efforts towards environmental sustainability. Ben is deeply concerned about the environment and ensuring big corporations and industries follow through in their pursuit towards a net zero carbon emission future. With his experience in Environmental Law, he has served as Court-Appointed Monitor of the Duke Energy Coal Ash Spill Remediation Project, as well as Deputy Monitor for  Emissions and Environment at the Volkswagen AG emissions proceedings.

Ben is Chair of the Environmental Law Institute (ELI) and serves on the Boards of PG&E Corporation and Northwestern Mutual Life Insurance Company, the Board of Trustees of Dartmouth College, and the Board of the Leadership Council on Legal Diversity (LCLD).

To ensure that future attorneys are diverse and highly skilled, Ben is a guest lecturer in several prestigious universities including Harvard Law School and George Washington University. He is also an Adjunct Professor of Environmental Law at Howard University School of Law.

Ben’s commitment to excellence, justice and civil rights are in his bones. He grew up in segregated Jackson, Mississippi where his parents worked at Jackson State University. His father would eventually serve  more than 20 years as president of Norfolk State University. The family’s value for education began with Ben’s grandfather, a freed slave who insisted each of his 15 children be educated.  Ben and his brother, Harrison III continued that tradition as undergraduates at Dartmouth College. Ben would meet his future wife, Merinda while they both attended Harvard Law School. Their daughter Rachel is a graduate of Michigan Law School graduate and Ben’s nephew Russell Wilson, the Super Bowl winning quarterback and Walter Payton NFL Man of the Year, graduated in three years from North Carolina State University .