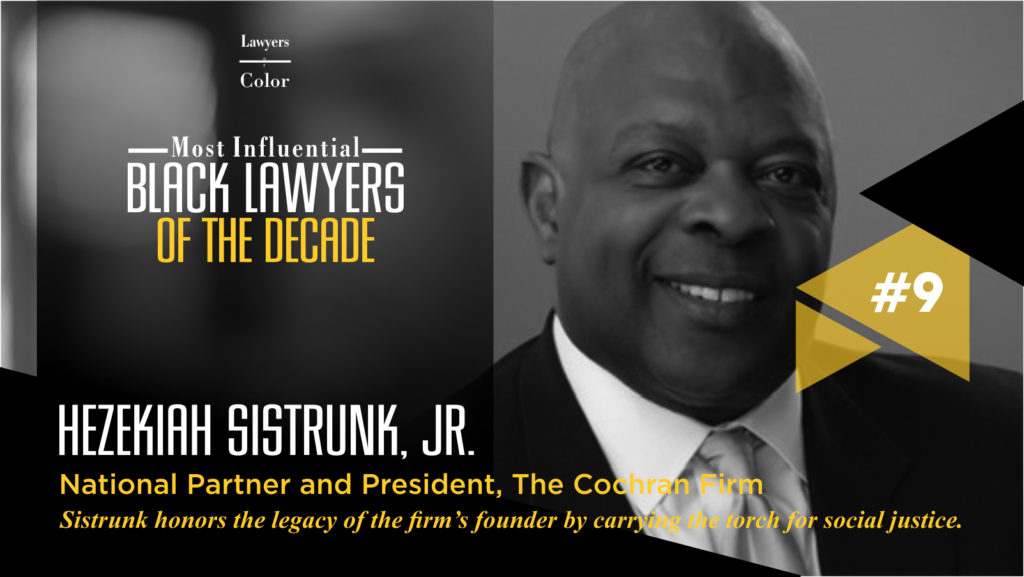 “One of the biggest problems we have in the country – and still have – is making sure that everybody has equal access to counsel.”

In 2005, Johnnie Cochran died after building a resounding legacy in the legal profession, defending people of color and ensuring that people get the justice they deserve regardless of race. Five years before his death, he invited Hezekiah Sistrunk Jr to join him at the Cochran Firm. Today, Sistrunk is the Nation Partner and President of the Cochran Firms’ 26 offices across the United States, and the Managing Partner of its Atlanta-based office. The firm, since the death of its founder, has played big roles in the fight against police brutality cases.

In his watch, the firm has secured over $35 billion in settlements and verdicts for clients. Personally, Sistrunk has tried over 100 cases to verdict in state, federal courts, and administrative agencies. His focus on litigating and divulging complex legal matters makes him an exceptional lawyer in this day America. He has also lectured on complex medical professional liability and conducted risk management and assessment for clients in various industries.

Sistrunk believes that his upbringing played a significant role in his choice of career and motivation so far. Born and brought up in Orangeburg, South Carolina in the ‘50s and ‘60s, he experienced the backlashing effects of racial segregation firsthand both in everyday lives and on quest for education. This is particularly evident as Orangeburg is the home of two historically black colleges. Sistrunk confirmed that his teachers from Wilkinson High School were highly inspiring, urging the kids to pursue their dreams relentlessly against all odds.

Also, Sistrunk was from a well-read family where he learned about the NAACP Legal Defense Fund. According to him, the efforts of the LDF in leveling the playing field for people of color inspired him to pursue a path in law. This and his background in a racially segregated community had influenced his decision to join Cochran in building an African American legacy.

So far, Sistrunk has built a reputation for himself as well as the Cochran Firm. While doing so, he has won several awards and has been recognized by reputable bodies across the United States. Some of these awards and recognitions include President of the National Trial Lawyers, The National Bar Association Maynard H. Jackson, Jr. Legacy Award, Clarence Darrow Award, Lawyer of the Year in Product Liability Litigation – Plaintiffs in Atlanta and a dozen of other remarkable recognitions and awards.