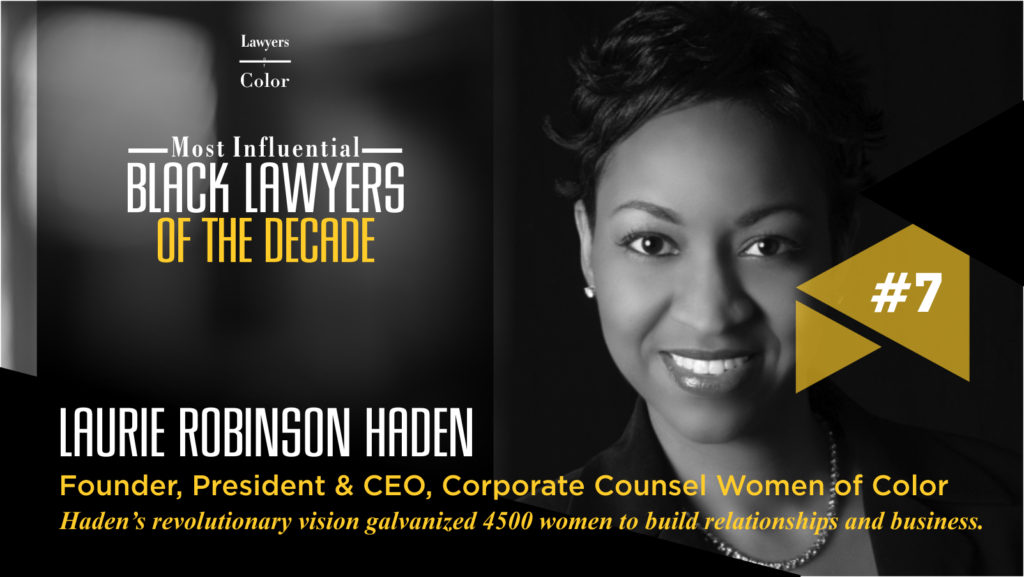 “The death of George Floyd struck a nerve with so many. The fight is not just for equality in law enforcement and the criminal justice system, but also in our workplaces — at our corporations and law firms.”

As of 2017, women constituted more than 33% of the legal profession but barely 20% of general counsels of Fortune 500 companies, law firm partners, and school deans were women. Obviously, the statistics are even more unfavorable towards women of color. In 2018, only 0.68% of African American women attorneys were partners at a law firm and 2.55% were associates. Mrs. Laurie Robinson Haden founded Corporate Counsel Women of Color (CCWC) to help minority women not only survive, but thrive in spite of the dismal statistics.

As the President and CEO of CCWC, Laurie has inspired thousands of women attorneys of color to greatness through scheduled conferences around the country. She has hosted over 1,300 relentless women attorneys of color. Her fight and support in promoting diversity in the legal profession led to her also founding the Corporate Counsel Men of Color (CCMC), a subsidiary of CCWC focused on facilitating the progress of male attorneys of color through the legal profession. Currently, the CCWC has over 4,500 members serving as general counsel and corporate counsel in Fortune 1000 companies.

In all respects, Laurie leads by example. Her impressive legal career is but one example.  A graduate of North Carolina Central University and Indiana University’s Maurer School of Law, she began her career as an intern at the National Football League and later worked as an associate in two New York firms, Epstein, Becker and Green P.C. and Seyfarth Shaw LLP. She then joined CBS Corporations where she rose to become Vice President and Assistant General Counsel of ViacomCBS.