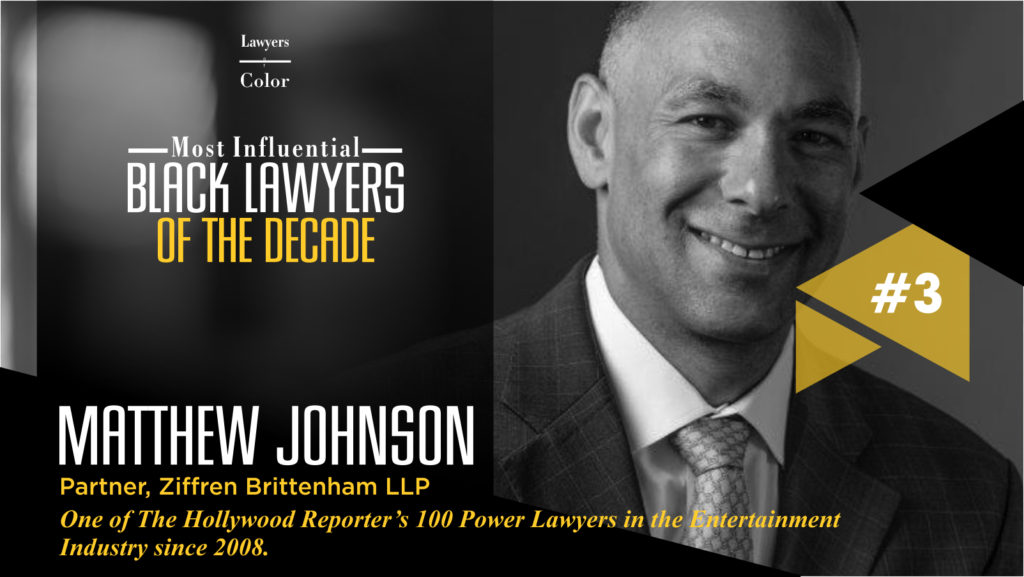 “When I went to law school I had two competing interests—the entertainment business and politics and social justice. I ended up basically doing both.”

In the last decade, Serena Williams and LeBron James have been the most dominant athletes; the most successful talk show host, Oprah Winfrey Network formed her own network; and actor, writer, and producer Tyler Perry built a literal empire having opened Tyler Perry Studios. These are the people who have dominated the culture for the last decade and they have all turned to Matthew Johnson for legal counsel.

Named to the Hollywood Reporter’s list of “power lawyers” every year since 2007. In 2008, he became the youngest person named one of The Hollywood Reporter’s 100 Power Lawyers in the entertainment industry and has remained on that list every year since. He was also named one of the Root 100 Most Influential African Americans in the United States. The next decade promises to be even more of a success as he’s recently

Johnson’s most recent deals for Perry and Will Packer are both innovative and expansive. Viacom guarantees 90 episodes of Perry’s dramas and comedies per year plus a first-look and film component. Packer’s deal with Discovery and Universal represents a new model for content production in which “TV and digital as equals, and combines the best of storytelling and brands for an under-served audience.”

In between this and shepherding deals for other clients, Sacha Baron Cohen, Andy Muschietti, Idris Elba, Phil Lord and Chris Miller, Johnson took on a second full time job. Motivated by the need for police reform following the release of video of Eric Garner being choked to death by policemen in New York, in 2015, Johnson accpeted an appointment by Mayor Eric Garcetti to serve on the Los Angeles Police Commission. Johnson was immediately elected president president of the Los, the five-person civilian board that oversees the nation’s third-largest police force. He served for several years.

Johnson met his wife, Yasmine Delawari Johnson, a documentary filmmaker and activist, at a barbecue and pool party supporting the Boys and Girls Club of America, which he’s been a part of since 1997. While raising their four children, Kailey, Nicolas, Maverick, and Malala, Johnson makes time for a fitness routine that includes navy seal obstacle courses